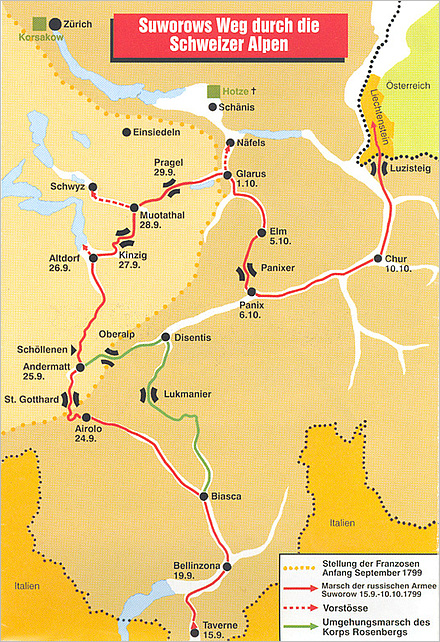 by Anthony and Maria Boulter

By September 1799 the French had over 70,000 troops in Switzerland, under the overall command of General André Massena. The Russian and Austrian forces opposing them numbered just 46,000.

Suworow had a difficult task before him — how to transport an army of 20,000 men with animals, guns, ammunition, food for the men, fodder for the horses and all the other equipment the army needed through the high Swiss Alps, where the passes were controlled by their enemy. He would have to fight his way through to link up with Rimsky-Korsakov’s army that had been left alone, facing superior forces, near Zurich: unbeknown to Suworow, their Austrian allies had decided to withdraw from Switzerland, back across the Rhine. 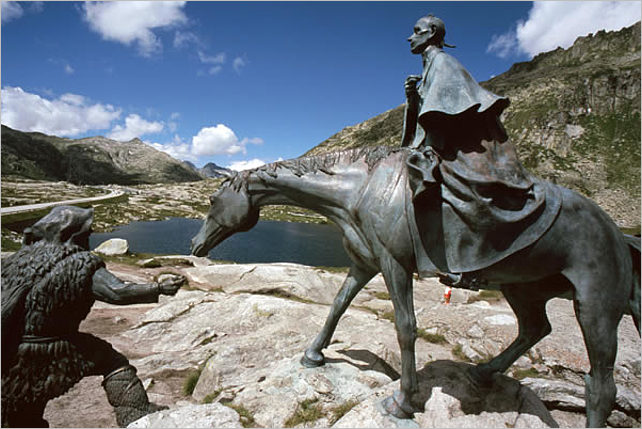 In Ticino the Austrians had promised to supply the Russian army with all the equipment and supplies they would need for the campaign, including 2,000 mules to carry it all. But these were not forthcoming and, in the end, Suworow had to order his 1,500 Cossack troops to dismount, so that their horses could be used for this purpose. The departure from Ticino was delayed by six days, a delay that was to prove fatal to the whole campaign.

San Gotthard and "The Devil's Bridge"

On 24th September Suworow’s army arrived at the St. Gotthard Pass (2108 m), which was defended by a French division under General Claude Lecourbe, an expert in mountain warfare. To outflank the French, Suworow sent detachments under Generals Rosenberg and Bagration through the more accessible Lukmanier (1914 m) and Oberalp (2044 m) passes, while he himself attacked the French forces directly. This frontal attack soon bogged down, as the road leading to the pass was narrow and under fire from Lecourbe’s forces. Only in the evening, after Bagration’s detachment had beaten the French on the left flank, was St. Gotthard in Suworow’s hands. 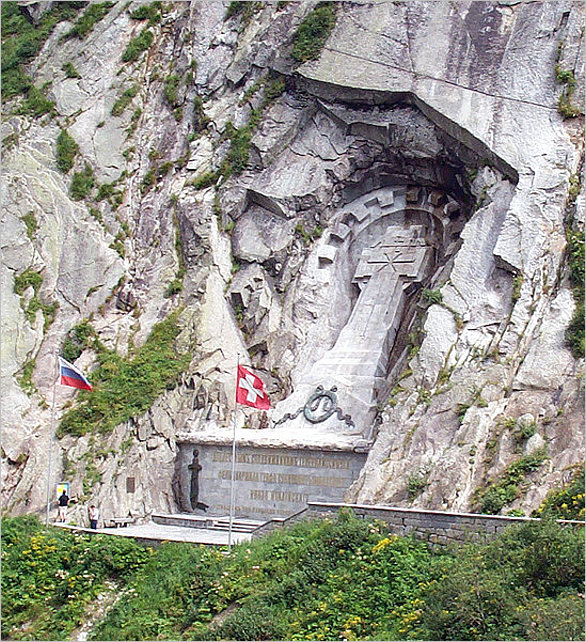 After spending the night with the staff in the inn in the village of Hospental, Suworow continued the advance, sending his army through the tunnel punched in the rocks, with the famous Devil's bridge, a stone bridge that crosses a great chasm between the mountains. As soon as Russian troops came out of the tunnel, the French opened fire with artillery and blew up part of the bridge. The damage was severe and it initially prevented any further Russian advance; but Suworow had his men construct a pontoon bridge from wooden beams tied together with the soldiers’ belts and officers’ scarves. A fierce battle then ensued. The French continued to resist until a Russian unit of 200 riflemen under Major Trevogin, by climbing further up the mountains, managed to circle round behind the French and attack them from the rear. A number of French  soldiers surrendered, the remnants of Lecourbe’s forces retreating.

Pursuing the retreating French troops, the Russian army arrived at Altdorf, close to the eastern end of Lake Lucerne. Then, a few kilometres further along the Lake, at Flüelen, Suworow discovered that all the boats on the Lake had been either removed or destroyed by the French. He also found out that, despite assurances from the Austrians, there was no useable road along the Lake north to Schwyz, just a narrow path that could only be traversed in single file.

Meanwhile, the French General Massena, having learned of Suworow’s approach towards Schwyz, immediately strengthened the local garrison and prepared to set by a trap for him. Suworow still did not know anything about the Rimsky-Korsakov’s defeat, nor of the withdrawal of the Austrians. Suworow, however, decided to take the shortest route towards Zurich — along the Rossstock mountain ridge and over the Kinzig Pass (2,089 m). On 27th September Bagration’s detachment was the first to set out for the pass. Leaving at 5 o’clock in the morning, they first of all drove off at bayonet point two French battalions who were blocking the road towards the pass.

The whole 18 km climb over the Kinzigpass was incredibly difficult and took three days to complete. The army had to travel along narrow paths where only mountain goats could feel at home. By turns in snow storms, thick fog or heavy rain, buffeted by freezing, biting winds, they eventually descended into the Muota valley, the soldiers lowering the cannons with ropes across the steep, icy slopes, while trying to keep their own footing in the thick snow. 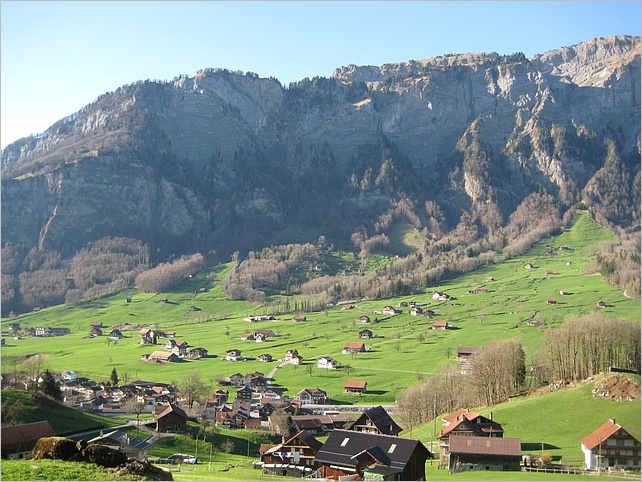 By 29th September the army had safely reached the valley, only to find there not their allies, the Austrians, but still more French troops. Once again, the only exit from the valley, towards Schwyz, was blocked by the French. To make matters worse, Suworow now learned about Rimsky-Korsakov’s defeat at Dietikon near Zurich, and the Austrian defeat on the river Linth.

Here is what had happened: General Massena had learned from a spy in the Russian army Headquarters that 26th September was the day when Rimsky-Korsakov planned to go on the offensive. He quickly set about launching a pre-emptive attack on both the Russians near Zurich and the Austrians under their commander General Friedrich Hotze on the river Linth near Glarus. On the night before the planned Russian attack, commandos were sent ahead to eliminate the Russian patrols silently, with bayonets, so that the bulk of Massena’s forces could approach across the river Limmat without the alarm being raised. Before they knew what was happening, both allied armies found themselves under attack. Over the course of the next two days the allies were subjected to a crushing defeat and most of those who were not killed in the battle immediately surrendered, the total allied losses amounting to some 9,000 men, including Hotze himself, who was killed in an ambush only the minutes after the battle had begun. The remnants of the allied forces retreated across the Rhine, the Russians north to Schaffhausen, and the Austrians east to Liechtenstein. The French now had a numerical advantage over Suworow’s forces of four-to-one. And he seemed to be trapped in Muota valley.

After such a catastrophic defeat of his colleagues and allies, Suworow realised that there was no point trying to continue the campaign by himself. In the Franciscan convent in Muota valley, Suworow gave a rousing speech to his military council that impressed everyone present. According to Bagration, he said, turning to Prince Constantin: "We are surrounded by mountains ... and surrounded, too, by a strong and confident enemy, puffed up by his victory ... We can’t now expect help from anyone, but we can hope for two things – God’s providence and the boundless courage and heedless self-sacrifice of our troops, led by you ... We are facing a task unprecedented in history! We are on the brink of an abyss! But we are Russians! God is with us!"

On 29th September, once the story of his allies’defeats were confirmed, Suworow decided to try to link up with what remained of the allied forces. The only remaining way to go was east, over the Pragelpass (1550 m), and the army started to move off in this direction. However, they were constantly harassed by the French. They first attacked in Muota valley on 30th September but were beaten off by the Russians. Frustrated, Massena prepared to lead the next attack personally.

On the morning of 1st October the French tried again. General Rosenberg, on whose forces the attack fell, had been expecting such an attack and had prepared a strong defence in three lines. The Russians, apparently, did not intend to allow the attack to upset their own plans and all the troops who were not directly engaged in the battle withdrew. When they saw this, the French rushed forward, encouraged by the presence of their commanding officer. But the Russians had not withdrawn: they had swung around behind the French, seizing three guns and a large number of prisoners. Now the Russians went on to the attack and, soon, the French rearguard was destroyed and the remnants of the French forces rushed, in complete disarray, to escape over the Schoenenen bridge (now called Suworow’s bridge). 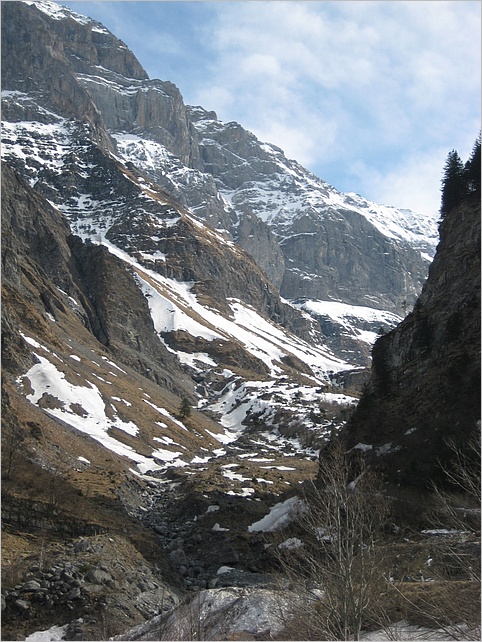 Massena was forced to withdraw his remaining troops to Schwyz, which they were strong enough to hold, although the second battle in Muota valley had been a heavy defeat for the French, with Massena himself lucky to escape capture.

With his rearguard holding off twice as many French soldiers, Suworow lead the army over the Pragelpass into the Canton of Glarus where they found more French troops.

Suworow fought his way along the Klöntalersee and to Glarus, which he succeeded in taking, but he could not proceed further towards his allies as the exit from the valley was blocked by the French and he could not hope to overcome them without heavy artillery, which had been lost in crossing the previous passes. The only remaining way was to go south across the high Panixerpass (2407 m).

This transit was probably the most difficult of all for Suworow’s army. For those soldiers and officers who survived all its hardships, it remained in their memory as the most terrible test of human will and physical strength. Fresh deep snow had fallen unexpectedly and the mountain path was not even visible. Almost all of the guides had fled and the army was moving blindly through the heavy snowfalls and icy conditions. 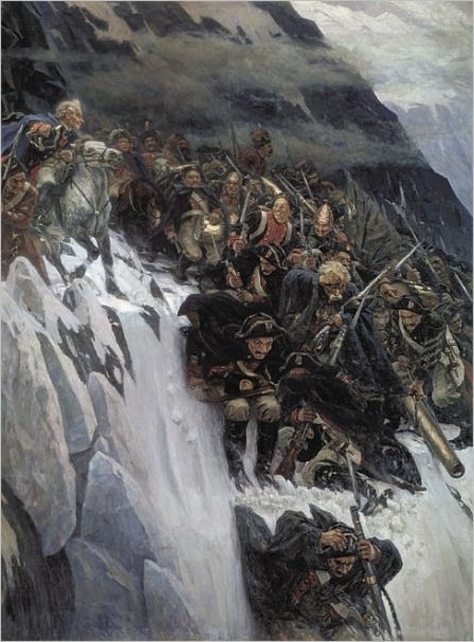 On 6th October the Russian troops set off from Elm and on 8th October Suworow’s army finally reached the city of Chur where they met their Austrian allies led by General Aufenberg. The appearance of the Russian troops was deplorable — the majority of officers had no soles left on their boots and the soldiers’ uniforms were torn almost to shreds. Suworow had lost more than a third of his army from cold, hunger and falling off the mountain ledges, he had disposed off almost all of his cannons. During the whole campaign the Russian troops paid for whatever they got from the local population which was not a common practice amongst most European armies. Although Suworow had lost all his supplies and artillery, he had kept the French prisoners alive and transferred all 1,418 of them to the Austrians in Chur. 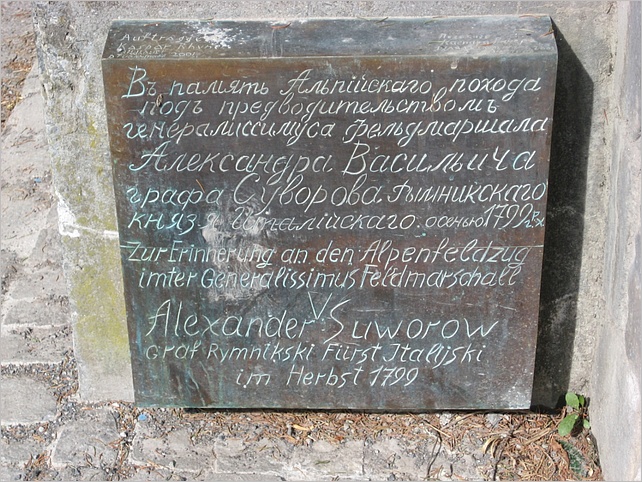 After two days of rest the Russian troops moved along the Rhine and on 12th October made camp near the village of Altenstadt. For several days the soldiers rested, washed, were issued with new clothes and boots and were fed, and by the end were ready to march again. However, on 22nd October the Russian emperor Paul I ordered them to return to Russia. The Swiss campaign was over. The Russian army had crossed six mountain passes: San Gothard, Lukmanier, Oberalp, Kinzig, Pragel and Panix. The campaign had been a failure, and yet Suworow did not suffer a single defeat.

Despite all this, the glory of the Russian arms in this campaign had not been dishonoured. Even André Massena later admitted that he would swap all of his 48 campaigns to have lea one campaign like the 17 day Swiss expedition by Suworow.